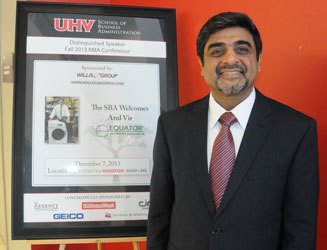 SUGAR LAND – Team Andrews used scouting, working hard and reaching out to the company it was researching to get a leg up on its competitors in the University of Houston-Victoria Master of Business Administration Case Competition.

The extra effort paid off when the team made up of Houston residents Hong Thai and Aiday Luckett, and Katy residents Vrushali Patil and Lindsay Voorheis finished first out of 28 teams competing in the Dec. 7 UHV School of Business Administration’s Fall MBA Competition.

Thai sat in during the MBA Case Competition in the spring to get a feel for it. Then he contacted the winning participants to get their feedback and coaching.

“I thought it would be helpful to get some mentoring about how to approach the competition,” Thai said. “If we were going to compete, we wanted to get as much out of the experience as possible.”

Since 2003, the conference has been the culmination of the UHV School of Business Administration’s MBA program. Held at UH Sugar Land, where UHV offers many of the programs, the event also featured a luncheon, mini career fair and keynote address by Atul Vir, president of Equator Advanced Appliances.

There were 96 students from the MBA capstone course “Seminar in Strategic Management” who competed in the conference. Winning team members received a plaque and also will be invited to participate as panelists at future case competitions.

One of the past winners judging this time was BJ Abraham, a 2012 MBA graduate who works in Victoria as vice president of finance for Regency Nursing and Rehabilitation Centers. Abraham said he was looking for how much thought the students put into their case.

“I wanted to see how they understood the scope of the problem they were trying to resolve,” he said. “In the solutions they were preparing, I looked for whether the students thought about the economic ramifications or just had wishful thinking. Likewise, how realistic was that solution? Does the company have the wherewithal in terms of money, manpower and technology to do what was suggested?”

Patil, who studied finance at UHV, said the team addressed the issue of a food distribution company’s drop site and proposed a recommendation to overcome that issue. The members also were polished in how they presented.

This year’s case topic was about Sysco, a Houston-based corporation that distributes food products to a variety of businesses. During team Andrews’ presentation, a judge asked how the team planned to take the case to Sysco.

“What the judges didn’t know at that point was we had invited a Sysco business analyst to review our case,” said Thai, who earned an MBA with a management concentration and runs an engineering firm. “We couldn’t schedule a time for it prior to the presentation, but I did invite him to attend the day of the competition, and he took us up on the offer. What I really want to do is take this case to Sysco and put the concept into operation.”

“It’s always satisfying to see all the effort MBA students pour into the competition,” said Farhang Niroomand, dean of the UHV School of Business Administration. “The judges were impressed with the presentations and thought many groups did an outstanding job.”

Patil and Thai both said they enjoyed the keynote address by Vir, which was part of the Willis Group Distinguished Speaker Series.

An entrepreneur and inventor, Vir runs Equator Advanced Appliances, a manufacturer of innovative household products. His best-known contribution is the development and marketing of residential laundry appliances, specifically combo washer-dryers that wash and dry in one integrated unit. The units are sold at Best Buy, Sears and several other retailers.

The story of how he brought the combo washer-dryer captured the attention of UHV students, faculty and alumni attending the luncheon, said Jeff Blodgett, associate dean of the UHV business school.

“Mr. Vir couldn’t get any financing when he first started,” Blodgett said. “He borrowed all he could on his credit cards and took out all his savings. He formed a company in his father-in-law’s garage. He took a leap of faith. When this machine became popular, he eventually attracted competition. So then he had to innovate even more.”

“The career fair went over very well,” Blodgett said. “The companies set up in the morning, joined us for the luncheon and then met with our students in the afternoon. The firms I talked with said they got some good prospects out of it.”

Why True Business is About the Customer

Why Management is an Ever-Evolving Role

Doing business as the underdog

Overcoming challenges and never giving up